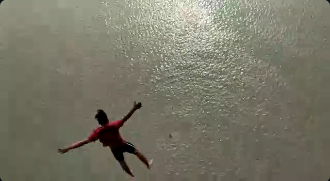 Kolkata: In a frenzy, two youths jumped off Howrah Bridge on Monday afternoon. One of them died, while the other did not suffer any injury. The news broke out when a video of the incident went viral on Whatsapp.

In the video, seven youths were seen at the sidewalk of Howrah Bridge. Two hung from the rails, while others persuaded them to jump. Eventually, the first person dived into the Ganges and re-surfaced while following the first person's lead the second did not. Soon after, one was seen floating, but the other drowned. Instantly, their friends started calling out Raja- the first to jump- to find the other victim whose name is still unknown.

It is a speculated that the boys, in their early 20s, are residents of southern Kolkata. The incident seems to be an aftermath of a failed love affair as one of the video makers shouted ‘pyar ke liye jaan dene jaa raha hain’ (giving one’s life because of love).